The Best Things In Life Are Free


The moon belongs to everyone, the best things in life are free.


The flowers in spring,
The robins that sing,
The sunbeams that shine:
They're yours, they're mine.

Please feel free to help yourself to both. If you feel you would like to give me something back that is also free, a few words is all it will take to write a review on Amazon.
Happy reading.

Glory In My Story 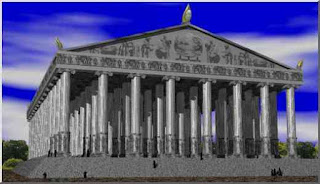 My current project is Ephesus, which had a former working title of Fairfax Goes To Ephesus. As a comedy writer, Ephesus presents my biggest challenge, as the plot is set around one of the Seven Wonders of the Ancient World. The term 'Wonder' should imply that the mere sight of it should evoke feelings that shakes the very of core of our being, whether it be ancient or modern times. Ephesus is set in both. The Temple of Artemis was built during the 6th century BC in marble with 127 sixty foot columns and decorated with bronze statues. The Greek poet Antipater said in a poem in140 BC,  “I have gazed on the walls of impregnable Babylon along which chariots may race, and on the Zeus by the banks of the Alpheus, I have seen the hanging gardens, and the Colossus of the Helios, the great man made mountains of the lofty pyramids, and the gigantic tomb of Mausolus; but when I saw the sacred house of Artemis, that towers to the clouds, the others were placed in the shade, for the sun himself, has never looked upon its equal, outside Olympus.” I don't think anyone could have described the Artemision's magnificence more eloquently than that. Nor could I think of any man made structure from the modern world that would merit such a description. 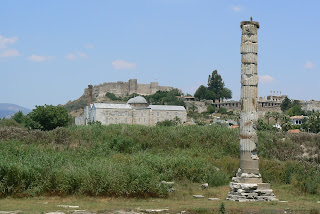 Today the remains of the Artemis's Temple are limited to one crudely reassembled column. Nevertheless having been there, that one column presents a sense of scale of what was once a monumental edifice. Forearmed with some rudimentary knowledge of Ephesus and the Temple of Artemis, there is little doubt that this special place has a presence that will bring about feelings from within that today, it is no less a 'wonder' than it did when it was over two millenniums ago.
A few years ago when I visited Ephesus, I knew then that I had to write about it. I want to give my readers a sense of awe when they read my take on Ephesus. I write comedy, but I have no wish to trivialise or appear to be irreverent about the place or the ancient civilisations that Ephesus represents.
There lies my challenge. Mess it up and it will appear to be a Carry On story, that has no place into today's book market.
Posted by Unknown at 01:39 2 comments: