The romantic image of a writer shut away in some far-flung retreat miles from civilization, seems more unlikely than ever before during the dawn of a networking age that we are currently living in. Admittedly, there may be an element of secrecy for the closet unpublished writer. It is an odd thing to say within your own social circle 'I'm a writer' if you're not yet the household name you would wish to be. If writing is what you do then a writer is what you are.

But is this really a new age? I attend a screenwriter's group in London as often as I can. It's a small group who meet in a pub where around four scripts per month are critiqued, and valuable feedback is given. This is the best learning resource I have, to try and improve my writing. Collectively there is a wealth of experience and knowledge in a relaxed atmosphere over a couple of pints of bitter in an old London pub. I can't help evoking an image in my mind of writers, artists and philosophers at similar meetings over the years none more famous than the Bloomsbury group. During these whimsical moments, I'm including myself as continuing this long established tradition (dream on).
Writers need to network with writers for so many different reasons. For one, if you can't cope with rejection, then don't be a writer was said by a publisher speaking at a writer's conference I went to earlier this year.
That's sound advice, but what better support can you get at times like this than the support of other writers to soothe the publisher's or agent's rejective lash marks.
Writer's magazines such a Writer's Forum is another resource for making valuable connections, such as workshops, conferences and linking with individual writers like Nari (Postcards From My Mind http://nari-journal.blogspot.com/). I also have Nari to thank for Judith (http://millil.blogspot.com/) and HC                       ( http://hcclarke.blogspot.com/) and HC to thank for Sam. My own blog introduced me to Deborah (http://deborahjbarker.wordpress.com/ Living Between the Lines) a regular commenter. I also have xmisty, MikeyW who I know personally. He's a very brave young man who regularly does open mike sessions in Comedy clubs around London. I need to give him a nudge to get his blog going. And a special hi to Matt Alan.
I have a writer's account on Facebook and Twitter. Twitter I find more useful than Facebook, but I have some nice contacts on FB.
My pastime of writing has become the opposite of solitary, which is enough reason for me to continue and never give up.
Posted by Unknown at 16:28 4 comments:

I'm thinking of writing some of my work as novels or novellas and self publishing through Amazon for the Kindle.
Good move? Bad move? I'm undecided. 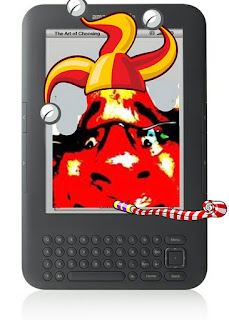 And what about the POV? First, second or third person narrative? Past or present tense narrative?
I'm a dialogue addict and am prone to getting carried away with it, even for stage plays. What is an
acceptable proportion of dialogue in a book?
I could spend days or even weeks pondering over these questions. But I'm going to do it really soon and post some of it here. With luck, some of you critics out there will give me feedback. Positive or negative, its all good.
Screenscribbler has become more of a Screenwobbler and piled on the pounds, so I've joined a gym. An active body may produce an active mind. Induction tomorrow then its onwards and upwards.
Posted by Unknown at 18:23 8 comments:

Back from our holiday. 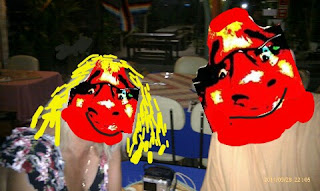 This time we hired a villa as we just wanted to do things at our own pace. No hotel restaurant schedules to adhere to although we did go to a different restaurant every evening as you can see from the above picture of Mrs Scribble and myself.
When we did venture out in our hire car, we were eager to return to our villa, and relax in the garden by or in the pool.
My mission to rewrite Henley's Ricotta as a workable stage play was accomplished and I read four books. Top of my reading list was 'Comedy Rules: From the Cambridge Footlights to Yes Minister' by Jonathan Lynn. Jonathan warns that this is not so much a 'how to' book but more of a memoir. However, through reflecting on his own experiences to illustrate his 'rules' the reader gets to share some of his insight going back to the basic psychology of laughter in the human species.
Stephen King's 'On Writing' has a similar approach and I strongly recommend the audio version read by SK himself.
Completely chilled and relaxed. Back to reality next week when I return to work.