Just enough time left for me to submit a July post. I've been researching for the re-write of 'Ushabti' which as I've said before will be written as a three act/one set play.
My main characters, the Bullocks, have not embraced modern technology. In the absence of a telephone (land-line or mobile), in my capacity as a writer, I am currently installing a Victorian speaking tube into their home. 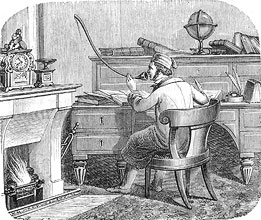 The only memory I have of speaking tubes was watching old black and white war films. Usually it would be someone like Jack Hawkins in naval uniform and duffel coat trying to make himself heard above the sound of a force ten gale. "Chief, can't you make us go any faster? I'm having a devil of a job trying to outrun jerry here."

On the other end would be a bare-chested actor daubed in black oil with the earpiece pressed against his ear trying to hear above the sound of the engine room.
The chief engineer's standard answer always seemed to be "we're already at full speed ahead, I don't think she'll take any more cap'n." These clichés were used over and over again in Star Trek (What Captain Kirk and Scotty wouldn't have done for an iPhone).

But the history of the speaking tube had wider applications than bridge to engine room intercourse. It was also installed in large homes and business premises, as a means of intra-household communication. They had a removable whistle built into them to alert the receiving person that someone was trying to speak to them. Hence the expression on the blower which carried over into telephone jargon. Incidentally the nautical version was a rigid pipe so the user would have to bend to hear it...bending your ear...more jargon. We're no different now...OMG and LOL.
Pre-telephone era, it must have been considered an ultra-modern gadget to have within a house.
Today technology changes by the minute when the latest smartphone app that does something that a few years ago would have been too far-fetched to believe, raises little more than an eyebrow.
Innovations have little impact today. There are too many to comprehend. People are losing their ability to be amazed.
Imagine the impact for families and servants when speaking tubes were installed. Magic lantern shows would have been truly wondrous.
I have early memories from living in a Victorian house in the 50's in inner-city Birmingham. There were obsolete servant bells and a stable in the backyard which we kept coal in, despite having three gas lit cellars which had been a dumping ground for unwanted bric-a-brac which the house had generated across the decades spanning two world wars.
None of this was photographically recorded. To take a photograph in those days usually signified an important event. Unlike today (going back to phones again) most people only have to reach into their pockets or handbags for that unexpected Kodak moment.
I often look back and lament the fact that my photo album does not reflect my personal cherished memories.
What I really should be doing is to be thankful I still have the memories of my own bygone past. A photo is only a visual reminder. The sight, the sound, the smell, the emotion and the significance are all stored away in the grey matter.
And they can be shared! As writers that's what we do better than your average snapshotter.
I am quite excited about installing my fictitious speaking tube in the Bullocks house. It doesn't have a big part in the story, but its very presence speaks volumes about my central characters and I hope it will inject a little bygone magic into my story.