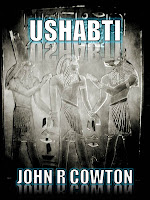 Ushabti is now available for download on Amazon.
I hope you enjoy. I had such fun writing it.
If you really like it, could you please leave me a review on Amazon?
One word like 'GREAT', is a review, or 'RUBBISH' if you don't like it, or if you really want to push the boat out, Una storia fantastica (ripping yarn).

If you haven't read Henley's Ricotta, it is also available on Amazon.

There are buttons on the sidebar which will take you to the book of your choice.

I moustache you a question.

Good luck to all those you NaNoWriMo contestants. Yes it's November and time for the National Novel Writing Month again. Not the snappiest acronym I've ever seen, and almost as bad as Movember.
NaNoWriMo is not for the procrastinators among us. Last year I procrastinated right into December before I made my mind up about NaNoWriMo that I wasn't going to do it. (Can anyone say the word NaNoWriMo without sounding like they have got a mouth full of cake?) The word limit to reach is 1,666.66 recurring words per day, which isn't too bad unless you have missed a day and it becomes 3,333.33 recurring.
Maybe I should look at Movember. Less pressure than NaNoWriMo. All you have to do is watch it grow whilst you sit still, or lie down and let that hair grow on the Parafiltrum, (which is the name of the skin between the nose and the upper lip. I once studied Anatomy and Physiology). Movember is sponsored  moustache  growing during the month of November. I could, of course consider entering both. Okay, okay, it's the end of the 4th day in November... allow me some procrastination please. But how could I write 1,666.66 recurring words per day when I have to concentrate on my itchy Parafiltrum, (because that's what will happen if I grow a moustache, it will itch).

I am not the most hirsute individual, by any means. Admittedly, I can grow hair better in the shade than I do on top, but I can grow a moustache thicker than a woman, can, well most women, not all women. But previous efforts have been a little thin to say the least. So maybe I'll procrastinate moustache growing and shave it for later.
Movember supports men's cancer charities, so I'll sponsor someone at work.