I've taken the plunge and put Henley's on Amazon Kindle. Henley's Ricotta is the first of three comic capers that I intend to publish.
It's a saucy romp which is set in the fictitious seaside town of Porthmunster in South Wales where Henley and his wife Gloria run a bed and breakfast called the Hotel Oceana. Henley's world gets turned upside down by a mysterious guest, Mrs Fanelli. George, who lives in the Seaview B&B next door adds to the chaos.
My next project will be to get Ushabti out there as soon as I can followed by Fairfax goes to Ephesus.
I hope I can contribute to generating a  renaissance of the humour genre whose popularity appears to have dwindled in recent years. For me there is a huge gap in the book market left by people such as Tom Sharpe whose books have been an inspiration to me.

I see comedy as more of a style in my writing and secondary to story.
I hope you enjoy. If you haven't got a Kindle, you can download the free software for your PC and/or your mobile phone.

Please click on the link to purchase Henley's Ricotta

It Was Murder In Harrogate

I got back from Harrogate on Sunday after three days of the Crime Writing Festival plus Creative Thursday workshops the day before the festival got going.

The venue, The Old Swan Harrogate was the place where Agatha Christie's mysterious disappearance in 1926 came to an end.
Creative Thursday, was well worth the extra day, with a workshop on Plot development in the morning with creative writing teacher Greg Moss from West Dean College and husband to author Kate Mosse who we saw later in the festival.
We were treated to a talk from successful authors Mark Edwards and Louise Vosse who launched their writing partnership on the Kindle and have landed a lucrative publishing deal. During the afternoon crimewriter Stuart McBride led a two hour workshop with his team of forensic experts Lorna Dawson, Professor Dave Barclay and Dr James Grieve, forensic scientists from The James Hutton Institute in Scotland. By the end of that session, if we didn't know how to write a good murder we sure as hell had a good idea how to commit one. The day came to a close when brave aspiring authors (I was too chicken... for that reason I was out) faced 'The Dragon's Pen.'
The opening party on Thursday started with an awards ceremony. I felt privileged to see Colin Dexter, the creator of Inspector Morse, receive a lifetime achievement ward. Author Denise Mina won the Crime novel of the year award for her ninth book 'The End of the Wasp Season.' 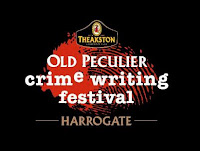 Over the following three days discussions and interviews ran in succession from nine in the morning throughout the day with one or two late night events. All the writers were accessible to everybody. Mark Billingham, Val McDermid, Jo Nesbo, Harlan Coben, Stephen Leather and Ricki Thomas to name but a few.
I have already booked my hotel for next year, it sells out fast and would recommend the event to anybody interested in the crime genre. It was said on more than one occasion, during the festival, but I found out for myself, that crime writers are the best people anyone could wish to meet.
Posted by Unknown at 23:53 4 comments:

First of all I would like to welcome all new followers on Networked Blogs and Google Friend Connect.

Henley's Ricotta is almost done. I've spent a lot of time working out how to format a word document to Kindle. It's supposed to be easy, but maybe I'm a slow learner. I ended up purchasing some software to do the job for me. For those who don't know (which included me until recently) the reason word doc, pdf or whatever format you want to install on a Kindle, needs to be in an 'epub' format or 'kindle content' is that it can retain its format when the Kindle reader changes the size of the font.
Anyway I got there in the end and emailed it to my Kindle. Currently Henley's has a readership of one; the author. At this point in time I need to be the only reader. I found myself seeing my book through different eyes. No longer are they the eyes of a writer, I am seeing my book as a reader, and lo and behold,  I can see that it needs some more editing. After painstakingly daisy-grubbing my laptop screen-shaped prose over and over again, it was all too easy for me to miss easy mistakes, such as sentence structure and minor inconsistencies with either character or plot. When a writer has created the story, it seems the mind doesn't allow the eye to linger over the words long enough to spot what should be an obvious error. But in book form, I found I'm looking at a finished product, and the effect was immediate. I was able to forget who had written it and began page turning in a more objective way.
For anyone who hasn't got a Kindle or any other similar device, you're not missing out because Microsoft Word's 'Full Screen Reading' view has the same effect. I have tried writing in 'Full Screen' thingummy, but it put's me right off course. When I'm writing I need to be a writer not a reader.
Hopefully I will be off to Harrogate this week for Theakstons Old Peculier Crimewriting Festival. I say hopefully because I've not been too well lately, but fingers crossed I'll make it. If I don't publish a post whilst I'm there I'll write one when I get back.