I’m sure most of us have experienced social situations, when after superficial greetings, pleasantries and platitudes have been exchanged, there follows deep sighs and uncomfortable silences. It can happen to both new and long acquaintances between loved ones and not so loved ones. A situation when you may simply have nothing new to say, or want to say something but don’t quite know how or even if it is appropriate to say it, plain boredom, or one or the other has said something to cause offence.


A writer may experience similar discomfort when afflicted by writer’s block. Indeed, when I reflect on my ramblings on this blog, I wonder how I have managed to keep this going on what is now my 78th blog post. But, I am a rambler at heart, which is often how I get my short stories going. I think of a simple premise, and ramble on about it my note book or on my computer until a story develops. When the story becomes boring or dries up then I will make something completely distracting happen.


I have found both in life and in my writing, during such moments, to say or write something distracting often helps. It is often the unexpected that makes what you have to say interesting. After all who wants predictability?


Naturally, when the first draft is completed there will be a lot of pruning to do, but I find my more unstructured approach particularly useful for short stories. For anything longer and my script writing I prefer to storyboard, and have a good plan.


My current project is: a man discovers he has been issued a parking ticket. It’s happened to me, as indeed to most of us. I wanted to examine this situation and turn it something that gets completely out of hand.


My previous project was about a shoplifter. What was his thoughts to drive him to do something completely out of character?


Simple everyday situations which we either experience or hear about. How to make it different.


I am sorry I haven’t published any of these on my blog. If I did I wouldn’t be able to enter them into competitions. Eventually I would like to publish them as an anthology.
Posted by Unknown at 12:59 No comments:

Okay, so I here I go. I haven’t got a clue what I am going to write about, but I am long overdue to make another blog post, so I am just going to ramble. What I will give you will be unplanned, uncut and unedited, just a pure unadulterated ramble.


But before I get going I have looked up in my Concise Oxford English Dictionary the definition of the verb ramble:  1. Walk for pleasure in the countryside, 2.  (often ramble on) talk or write at length in a confused or inconsequential way.


Let’s take a look at both of those definitions from a writer’s perspective. I don’t walk as often as I used to. I have been a dog owner, but the responsibility of caring for man’s best friend does not fit in with my work schedule. But when I did have dogs I was out walking in the countryside every day. I have also been a member of a local rambling club, and learned that the countryside is there to be enjoyed all of the year round. 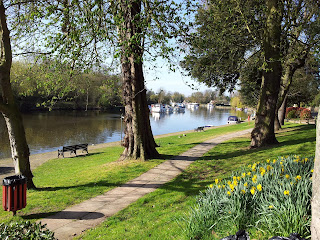 Getting out and about on hills and dales, forests, riverbanks, lakesides and coastal paths is just the nutrition that converts to creative juice that is enriched with experiences, discovery that will fuel a burning motivation to write, paint, or even compose a symphony. For some the solitude of a remote hillside walk at the crack of dawn, alone with one’s thoughts (or alone with the dog as the case may be) can be liberating for the mind, with no human interference between the walker and what is natural around us. The walker/writer could be in the Lake District thinking and making notes about the next chapter of a novel set on the streets of Liverpool, it doesn’t matter, he will have been taken into the warm embrace of mother nature, for a few moments that is needed to clear the mind in order write. Elgar walking his dog over the top of the Malvern Hills composing the Enigma Variations or The Dream of Gerontius and Agatha Christie articulating her sentences out loud in the remoteness of Dartmoor come to mind.  Whilst I, during the act of writing this, have been interrupted by the phone twice, emails coming in, the washing machine needing attention, to name but a few domestic disturbances.

For others, the countryside is a more shared experience, with loved ones, friends or indeed as I did many years ago as a member of the Rambler’s Association, which I found to be educational in sharing knowledge and experience of the countryside, inspirational inasmuch as the diversity of human behaviour that one finds in any bunch of people put together who share a common interest. I suppose the rambling club could take on both definitions of the verb ramble as they do tend to ramble on as they ramble the countryside.

Which brings me on to the second definition. Isn’t talking at length in a confused and often inconsequential way what most of us do most of the time? It’s how we communication. Sequential interchange of information where an appropriate response is elicited every time only ever happened when a back story was required to be written in, as an afterthought to complement the more athletic goings-on of a 1980’s porn movie, (so I’m told). To ramble is to converse. What is a conversation but verbal and non-verbal ping pong between two or more individuals who each have their own unique voice. As a writer it is good to capture some of the ramblings of others to make convincing but engaging dialogue.

Anyway, that’s enough rambling from me for today. If you want to join in the ramble, please feel free to ramble away in the comments box below. I'm going out for a walk.