Back home from Menorca. 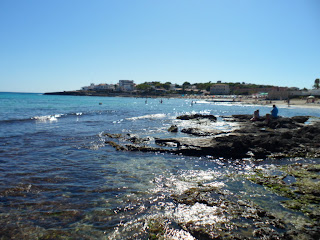 There is just enough time for me to post a second post for this month as I've just returned from a thoroughly relaxing time in Menorca. Relaxing it may have been, but I also had routine. In between, breakfast, lunch and dinner, and an archery session each morning and shooting session in the afternoon, I managed to find enough time to complete my first draft of 'Ushabti' in novella form.
Add to this, a reading list of Mark Billingham, Peter James, Ken Follett, Louise Voss and Mark Edwards, and a John Connelly selection of short stories.
I've not finished John Connelly's 'Nocturnes,' but when I have I will write a review for John, a nicer chap you couldn't wish to meet. Louise and Mark Edwards have been an inspiration for me, as successful indie writers who landed a deal with Harper Collins. Having read their debut novel 'Catch Your Death,' it's easy to see why. I've also got a signed copy of their second novel, 'Killing Cupid,' to read, and was kicking myself that I hadn't took that one on holiday too. So that's more reviews to write. I took standalone novels by Peter James, 'Possession' and also one from Mark Billingham, 'Rush of Blood.' They both have their own detective series, which I do enjoy, but I must confess, I think they are better when they take a break from their usual characters and venture into the standalone arena. Ken Follet's book 'Eye of the Needle' was written in 1978, when he was still in his 20's. This for me was the most well written which was plot driven, based on fact with Hitler and Churchill amongst the many characters in the book.
As for archery and shooting, you made me captain of the 'Ugly' team against the 'Beautiful Team,' Giovanni, (I hope you're reading this), but the 'Ugly' team had a beautiful win and were ugly no more.

'Ushabti' goes on the back burner for a few weeks, before the first edit, and in the meantime, I have a short story with a working title called 'Date,' which changed to 'The Last Waltz Should Last Forever,' which needs another edit, and a resubmission to 'Writer's Forum' magazine. If it doesn't make it this time, I'll try other magazines. I'd love to publish it on my blog, but some competitions would disqualify me for that, but should it get published in a magazine I will then post the link on this blog.
Posted by Unknown at 21:39 No comments:

I've never been a gamester, but I must admit I'm a sucker for downloading the occasional app. The functionality of apps appeals to me, although I've yet to see one that makes me wonder how I ever managed without it.
I'm not a gamester, because I choose not to be.  There is no denying the appeal of an increasingly expanding market, which has a higher turnover than the film industry. Electronic games have become a major art form of our time. Whether it be Super Mario, Angry Birds or Call of Duty, it's an escape into an imaginary world conceived from someone else's imagination.
Isn't that the same as what fiction writers, artists and filmmakers do? Don't they entice you into their imaginary world? Undoubtedly, yes they do.
Here's the but, and it's a big BUT: but, in most media, there is a cut off point:

With games, the cut off point is not so easy to find, especially for the young , who have a whole lot more life to discover, but are trapped within the allure of a virtual reality. The excitement, the glamour, the challenge of the game is too full on. Trapped in someone else's imagination, which is unwilling to let you go.
Is Super Mario really the devil in disguise? When Mario says those immortal words, in his unique falsetto Italian tone, "Here we go,", is he meaning, ''I'm going to eat up years of your life asshole, and you won't even notice until it's too late.''
No, no, no, it's definitely not for me. That doesn't make me a better person. I know myself well enough to know I'm just as likely as the next person to become addicted to games.
Solitaire, on my laptop, or on my phone is about my limit. Keep it simple. I play it when I want to think about something else. Sometimes it helps me think. It's a game you can play on autopilot. After I've had a brief round of solitaire, it's highly likely that in 5 minutes time, I won't even remember I've played it.
JK Rowling once said that she plays a pretty mean game of Minesweeper, during breaks from her writing.
I recently downloaded Dominoes onto my phone. It has the same effect. I found myself taking breaks from my writing to play dominoes (the healthier option as opposed to having Domino's Pizza breaks). However, never having had much interest in drawing from the boneyard and counting the pips (they are expressions known only to us seasoned domino players), I have gone from that to buying a real set of dominoes. Yes I bought some last weekend.  Hand crafted in a wooden box. I also bought a travel set to take on holiday.Haven't played with them yet. I just keep opening the box and looking at them and sometimes (when nobody's looking) stroking them.

Now I'm going to play dominoes with a real person, not a computer. Hello reality, I've missed you. I'm so glad to be back.
If I can't find a real person then I'll have to buy a pack of cards and play real Solitaire... nah, that's not the same. Isn't it?

Anyone fancy a game of dominoes? If you do, can you bring your own dominoes? I don't like anybody touching them... okay, you can touch the travel set... No! I said no,.. don't touch the wooden ones. Would you mind leaving please