Eye problems, Mosquitoes and Hives, but apart from that it was a good holiday.

My writing plans have taken a knock back with problems with both my eyes having ulcerated and got infected from day one of my holiday. Fortunately it only slowed me down and not completely stopped me, so I got my first draft of Lifted complete and Ephesus is almost complete. Thank you Kindle for your adjustable font. 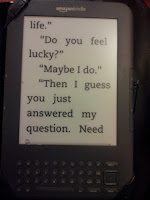 It was a bit like reading Janet and John with my thumb operating the page turner at such a speed, in a way that took me back to my pinball days on the flipper buttons. Thankfully my Kindle didn't 'tilt' and I got through quite a bit of reading. I would have gone out of my mind not being able to read on holiday. I have added my holiday reads on the right hand column. Just scroll down.
Sleep deprivation was also a problem, due to our nightly visits from the local mosquito population. I think they are an essential component of the tourist industry for most countries. The local economy was making an absolute killing on their vast range of mosquito repellent products, all of which I bought and none of which worked. I was kicking myself for not putting my own arsenal together in the UK and bringing it over, but call me paranoid, but I think these were genetically modified designer mozzies resistant to anything short of a nuclear holocaust.
Finally, the flight home. I don't mind long haul flights at all. I think to myself, ten hours of sitting doing nothing at all except sheer indulgence, being wined, dined and in flight entertainment. I had decided in advance that I would shun the in flight movies and make my own entertainment reading a David Baldacci novel. However, I had a sudden attack attack of hives as soon as I got on the plane. My head appeared to be mutating, with large bumps appearing alarmingly fast. Soon my whole body was covered and the cabin crew were concerned whether I would be fit enough to fly. I said I did not feel unwell, but I was very uncomfortable. So much so that I couldn't sit still long enough to read. I gave up on that and tried to watch a movie, gave up on that, and just did lots of getting up and walking. Thankfully I had an aisle seat. No idea what the cause was, but I have had some blood tests since I've returned, and have completely recovered.

Despite a shaky start to this holiday, including eye problems which needed medical attention, I have got off to a good start with my writing and my short story 'Lifted' is now complete. 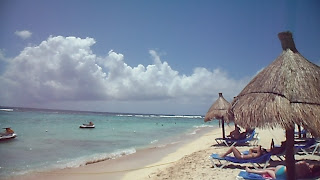 It's all systems go to complete 'Ephesus' once and for all, and I'm enjoying the portability of using pen and paper. I carry my notebooks everywhere with me now, and it has become my preferred method of writing, for at least the first draft anyway.
Thank goodness for Kindle, as my reading has not slowed down due to the extra large font I was able to use with my impaired vision. 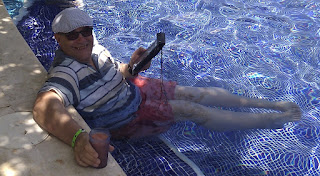 Thankfully I am on the mend and am now down to normal size reading.
I have a waterproof cover for my Kindle, which is great for reading in the pool.
The locals don't seem too impressed  (see below). 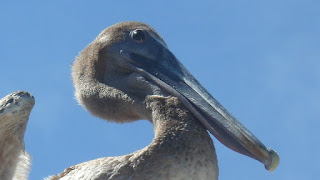 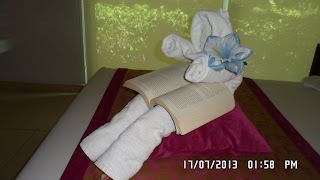 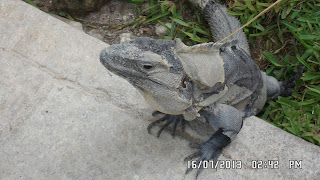