A number of people have been asking me for the past two or more years when my next book is coming out. I have had more than one project on the go and getting nowhere. After getting my motivation fix that I needed at Harrogate Crimewriters Festival this year, I have finally knuckled down to a project very close to my heart that has been around in one form or another for the past five years. Yes you have seen it on this blog, from time to time, in different formats. In the loft I have a complete storyboard with the plot divided into acts and scenes, for a screenplay. That's where it's staying. The story is more or less in my head, and that's the best place for it to be if my fingers are going to turn it into printed words. 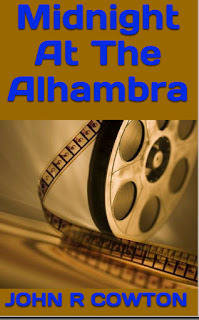 Although I have a very rough outline in my head, this is very much a seat of your pants story, and that is the way I have always found works best for me. I'm writing in a different voice and I don't know where its coming from. I now know that I'm going to complete this one, because my reading hasn't exactly gone on the back burner,  but has slowed down considerably because I'm getting more interest from my writing. I'm on Chapter Eight and coming up to 20,000 words, so it's well underway. I put a cover together, just to make it seem more of a tangible item for me, but it's not the cover I'm looking for. I need a picture of an old midwest movie theater taken at night. Haven't found the right picture yet. If anyone has one they think I could use, I would love to take a look at it.
The premise is Melvyn, from the West Midlands in the UK, is a cinema projectionist, and at the end of a bad relationship takes a job in Texas. He is a fish out of water with the local youth cowboy culture, and sets himself up against them because of the love interest, the girl most sought after in town, the sheriff's daughter. He's up against some big characters here, but it is going to be a zero to hero story.
I can't say anymore. Plenty of drama, and hopefully I have pitched the vernacular at the right level for the region. It is a different voice for me, but I have tried to retain some of my comedic style.
Posted by Unknown at 20:11 No comments: